A born storyteller of Irish American descent, DK King brings to the written page a refreshing, unique, and embracing style of literary art that captivates the reader with a relevant, yet visionary, mixture of wit and wisdom. ​

DK began sharing her sagacious style of writing in 2008 with the creation of a collaborative blog called "InTheRearViewMirror.com". Her own personal blog featuring condensed raw snippets from "Living The Big Sky Life" was soon to follow. DK was additionally honored to contribute the Foreword introduction to "The Galactic Transcripts", published in 2013 by her friend and author, Richard Andrew King. 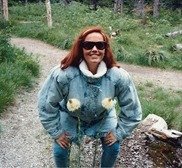 "Living The Big Sky Life" is a clever memoir by DK King that will take you on a healing journey from the outside in - from the coastlines of Orange County, California, to the big sky resort town of Whitefish, Montana.

In a written voice that can be described as nothing short of audacious - real, raw and irreverent - DK King portrays her powerful passage through the peaks and valleys of love and life on her quintessential quest to turn the lemons in her life into an ocean of lemonade.

Recounting her personal ordeal with vivid clarity and unparalleled recall, DK King chronicles an unforgettable series of transformational experiences like only a great storyteller can. Her fearless account is truly captivating, and should be a must-read for anyone who dreams of exchanging their robust urban lifestyle for the simple life in any small town U.S.A.

This is a book you won’t be able to put down until the startling end!